Elder scrolls online might not be the best MMORPG out there, but taking a glimpse at reddit, I could say that it has a good community. Elder scrolls online players help new players when they ask. Furthermore, the community of elder scrolls is not as garbage as people in the internet where the start of an argument is the comparison of PC and console.

They are helpful. They will kiss someone anytime and anywhere, though they are not gay, maybe. 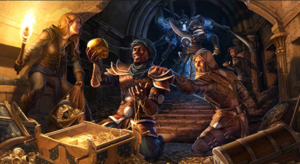 Of course, a community is still a community; I would not be surprise if there are still toxic players around. Toxicity is an irreplaceable factor in a community. It is like how you hate to fart when with your friends. However, farting is part of your body and can’t remove it.

The community of elder scrolls is pretty good. It is one of the best communities of MMORPG out there. it flows naturally which is supposed to be a normal community in all MMORPG today. However, game developers let stupid kids to play their games, resulting into toxicity being all over the place of their crappy game.

In conclusion, if the developers released this game on the right time, with its current community, it would be one of the best MMORPG ever. Their mistake was not releasing the game in the time where MMORPG is still kicking asses.