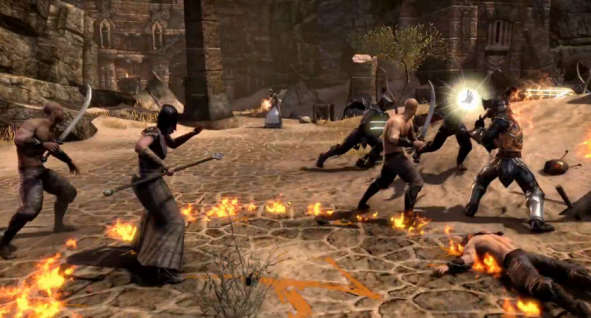 Attacking with your ESO gold hunter

Light attacks are the weapon’s basic attack. It requires no stamina or magicka and is done by pressing or clicking the attack button when an enemy is in range. The damage of this attack depends on the maximum stamina of your character.

For more damage and extra effects, Heavy attacks are used. These need to be charged first by holding the attack button. Note that disoriented targets hit by this attack will be knocked down. Like with Light attacks, these require no stamina or magicka and deal damage proportionate to the maximum stamina of the character. Note that fully charged heavy attacks actually restore magicka (staves) or stamina (non-staves).

Like in real life, your character will die if it gets too much damage regardless of equipped Elder Scrolls Online armor. Blocking can help delay this however. This can be done using any weapon or with a shield. Blocking will reduce damage taken by half while using stamina. You can of course use restorative Elder Scrolls Online items to recover stamina.

As you’ll learn through playing, there are attacks that simply need to be avoided. For this, Dodge Rolling is used. As the name implies, it will cause your character to roll and dodge an attack. It will move your TESO gold hunter from harm’s way while using up stamina. This is also useful when getting out of the way of spells and skills with nasty effects.