Today’s guide on Elder Scrolls Online will focus on a build authored by OptiMAT Prime (link below!), which focuses on group play PVP wherein the sacrifice of very high damage for above-average survivability means winning the fight. It utilizes a relatively high Critical hit chance with enough low-cost multiple-hit abilities to make the most of […]

Today’s guide on Elder Scrolls Online will focus on a build authored by OptiMAT Prime (link below!), which focuses on group play PVP wherein the sacrifice of very high damage for above-average survivability means winning the fight. It utilizes a relatively high Critical hit chance with enough low-cost multiple-hit abilities to make the most of the build. Your battles will rely on adept buff / de-buff management and being able to drain as much stamina and resistance as you can from your opponent. Find out more in the article below! 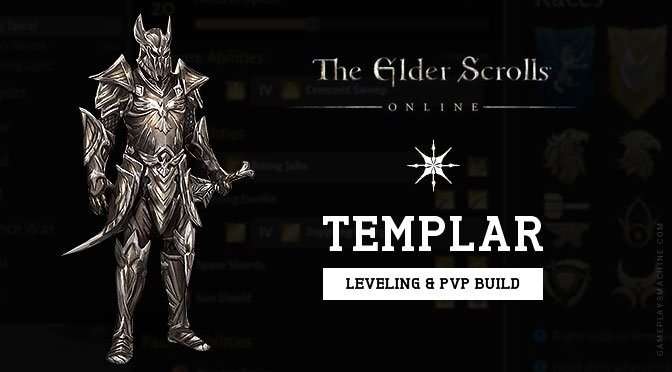 OptiMAT Prime’s build sacrifices survivability higher survivability. Expect lots of multi-hit abilities with a relativity high crit chance and de-buffs to deal more damage. If you like rushing to the middle of the fight without worrying of taking too much damage, then this build is much more suitable for your play style.

One of the good things about this build is that almost all of the Elder Scrolls Online weapons and armor you’ll need will be home-crafted: meaning you don’t have to grind high-level Group Dungeon activities in order to win fights, save for the Imperial City Elder Scrolls Online items which are not uncommon for sale in guild traders.

While engaged in PvP, it’s recommended that you begin combat with the Shield ability bar equipped. Spend some Magic on your gap closer, Explosive Charge. This only stuns if you hit someone while casting, which many see a big disadvantage; however, this will not be your main Stun ability on this build, and the AOE damage not only gives the build some PVE credibility, but is good in group combat as low health players tend to get closer.

The second stage of combat involves a combo of Ransack, which will be your primary attack on this ability bar, as well as Power Slam. Ransack is low-cost, relatively high damage, and has a great de-buff. With Physical resistance reduced, Power Slam is the main stun ability and provides Disorientate, providing a 15 second buff for Dual Wield skills damage.

The third stage is to switch bars, hit Biting Jabs (for higher crit) and weave light attacks with Blinding Flurry, topping up Biting Jabs every 2x Flurry if the fight continues for a long time to keep the weapon critical buff up. During this phase, don’t forget the buffs available to you should the difficulty or length of the fight require it. Flying Blade slows enemies trying to flee and increases your Weapon Damage. Quick Cloak also allows you to catch up with runners (plus can be a means of escape) and negates AOE attacks and provides some damage over time (good for tanks).

Don’t forget that you can heal yourself and one other member while tanking damage (Honour the Dead providing increased magicka recovery most of the time thus enabling more Explosive Charges or more heals in quick succession), and you can also heal and leech Stamina from the dead around you with Repentance. This can save you a bit from investing on recovery and utility Elder Scrolls Online items!