Ready your Elder Scrolls Online Weapons for the Alik’r Desert

We’re back with another guide for another zone to explore for those who collect Elder Scrolls Online items. Today’s guide will cover the Alik’r Desert, a zone under the control of the Daggerfall Covenant. Ready your Elder Scrolls Online armor and let us begin our journey. 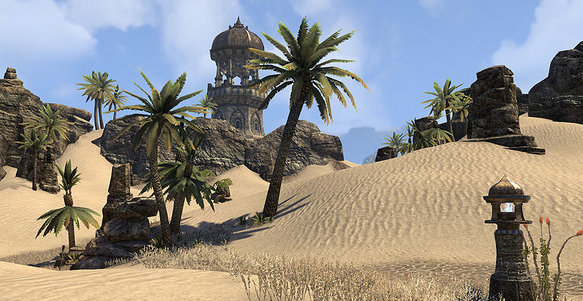 Where to get Elder Scrolls Online Weapons repaired

The Alik’r Desert was designed for characters level 31-37. As such, expect your Elder Scrolls Online armor and gear to get all banged up. They can be repaired however at any of the five cities in the zone. Bergama is in the south of the area, while Kozanset is off to the east. Satakalaam is a small city in the east of the zone while off to the north and west is Sentinel. Lastly, the zone has a port named Tava’s Blessing to the north.  If you’re done with your tour of the cities, you can also collect a total of 16 Skyshards spread throughout the zone.

Where to wield your Elder Scrolls Online Weapons

If you are looking to test out your new Elder Scrolls Online armor, then the Alik’r Desert has a few choice spots for you. Aldunz is a Dwemer ruin located east of Bargama in the south of the zone. Another ruin in the desert is the Lost City of the Na-Totambu. South of Sentinel lies the Dwemer ruin of Santaki, while another ruin Yldzuun is southeast of Kozanset.

There are also mines in the desert, Coldrock Diggings is just south east of Tava’s Blessing, while Divad’s Chagrin Mine is near the center of the zone. Lastly, east of HoonDing’s Watch is Sandblown Mine.

One good way of getting Elder Scrolls Online armor is by hunting group bosses. The Alik’r Desert has several of this starting with the one in Forsaken Hearts Cave. There is also the Lost Caravan, Hag Camp and King’s Rest which are small camps in the area. North of Leki’s Blade is Giant Camp, while southeast of Sentinel is the Lesser Circle.

The zone also contains one group dungeon, Volenfell, which is tied to three quests. These are Tharayya’s Trail, Blood and Sand and Volenfell Pledge.