Getting your First Elder Scrolls Online Weapons in Stros M’Kai

New players and hunters of Elder Scrolls Online items will get a first taste of loot by exploring Stros M’Kai.  This starter area in Daggerfall Covenant has been settled by Redguards. It is under threat however by Pirates coming from the Abecean Sea. 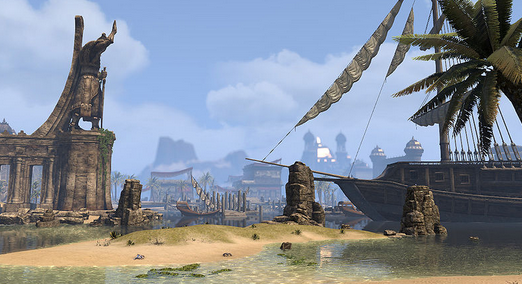 Stros M’Kai is a starter level designed  for Daggerfall Covenant characters at level four or five. It contains only three Skyshards. Players looking to get Elder Scrolls Online armor and items will want to head to Port Hunding. The latter is the only city in zone and is located in the center of the island. Aside from the city, players will also find a small town towards the south of the zone. Saintsport is the said town and is part of a quest.

While small, the zone has a few points of interest where players can get their Elder Scrolls Online armor. First of these is the Dogeater Goblin Camp found in northern Stros M’Kai. To the west of the zone, on a small island is the Pillar of the Singing Sun while the Rash Merchant’s Plummet, a broken bridge, is to the northwest of the the zone.

The zone also has a lone Dwemer ruin, Bthzark. The latter can be found to the west of the area. Lastly, North of Port Hunding is The Grave which is the city’s prison.

Quests to test your Elder Scrolls Online weapons on

Most Daggerfall Covenant players will find themselves in Stros M’Kai via the Broken Spearhead quest. This is where they can help their rescuer as payback. Other quests in the line include Buried Secrets where they help with a Dwemer ruin exploration, Innocent  Scoundrel where you help a prisoner, and Like Moths to a Candle. This last quest introduces players to the pirates the plague the zone. Other Daggerfall Covenent quests players can get from the zone include The Spearhead’s Captain, The Spearhead’s Crew and Tip of the Spearhead.

The zone also has several side quests players can do for extra experience and loot. A few notable ones are Dead Man’s Wrist, Izad’s Treasure and Last Night.