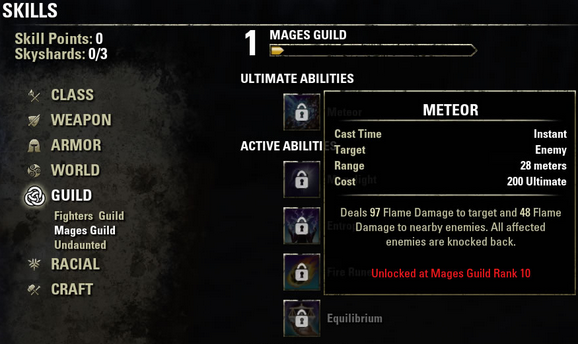 If not handled properly, fire can be your death. If you’re a member of the Mage’s Guild however, the Fire Rune ability will help you end your opponents’ lives. When used, this skill will create a Fire Rune at a specified location. This will then deal Fire Damge to those who enter its area of effect.

It can be morphed into Volcanic Rune to cause enemies to get knocked into the air. Enemies will also be stunned as a side-effect. Another morph is Scalding Rune. In this version, the ability will deal Fire Damage over time.

Save ESO gold when recovering magicka

Spell Symmetry is a morph of this ability. This will reduce the cost of your next spell when used. Meanwhile, Balance will improve the health recovery of your TESO gold hunter for a short period.

The Ultimate ability gained from the Mage’s Guild skill line is called Meteor. As the name implies, casting it will summon a meteor to fall on the target. The latter will then receive Fire Damage. Enemies nearby will also receive Fire Damage aside from being knocked back.

To deal Cold Damage and snare enemies instead, this skill can be morphed into Ice Comet. If you want to use this ultimate often, then consider the Shooting Star morph. This will cause you to gain ultimate for each enemy hit by the ability.